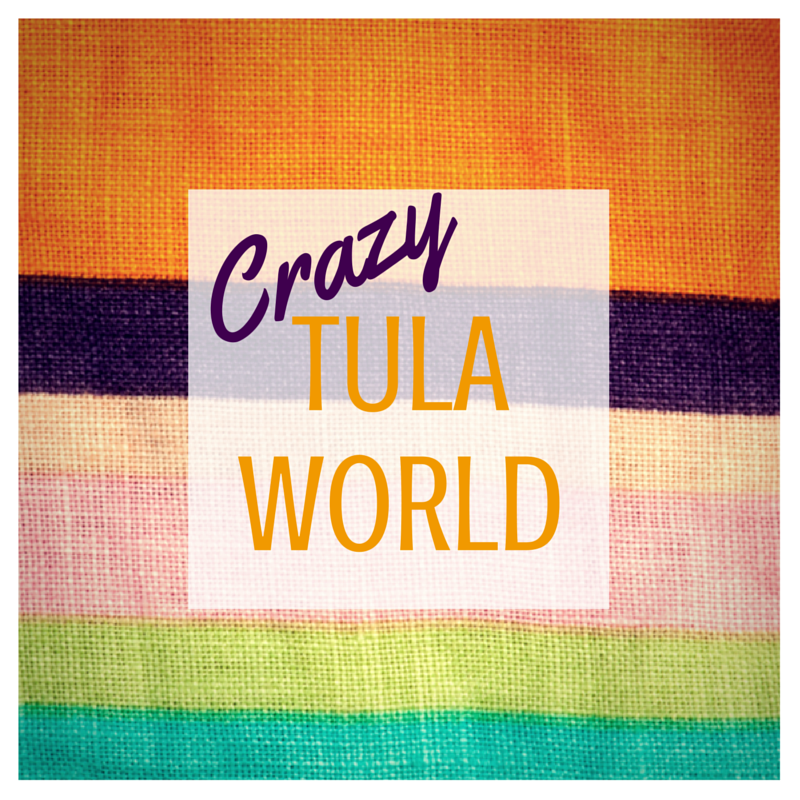 [dropcap]B[/dropcap]aby-wearing is nothing new. But, what if I told you there exists a sub-culture of baby-wearing that involves baby carriers being purchased, traded, and sold for between $200–1200 above retail price? Would you believe me?

Prepare yourself. You are about to enter the land of Tula, a baby-wearing, money-spending, mind-blowing cultural phenomenon. I’m still picking my jaw up from the floor and it’s been a good two weeks since I stumbled across Tula World where mothers are DISO (Desparately In Search Of) a particular design to add to their ‘stashes’ of Tulas.

I first heard the name Tula back in October 2014, during the last trimester of pregnancy with my third child. A FB friend shared a link and commented that it was absolutely the best baby carrier she’d used. “Much better than an Ergo! Perfect for petite frames!” She posted. This caught my attention. I’m a petite mom and not the biggest Ergo fan (the reigning baby carrier of choice among the crunchy supermom crowd, or so I thought). Thus, I was intrigued.

Since I am in the market for a new baby carrier for once my sweet baby hits the four-month mark, I did as any mom would do after hearing a glowing endorsement of yet another brand in the baby industrial complex. I googled it to see what other moms thought. I read some blog reviews, watched a video demo, and joined a couple of FB groups with the sole purpose to finding out as much as I could about these colorful baby carriers that rhyme with doula. What I discovered blew me away.

The Cult of Tula

Tula has it’s own language. Do you know what ‘DISO HTF STD Oki Full means?” Tula has gurus. If you’re new to Tula World and are considering purchasing a Tula, at first you’ll be lost and have no idea what people are talking about. So, Tula newbies ask Tula mamas who’ve been around for a while and who have a substantial stash, to show them the ropes and teach them all there is to know about Tula world.  Tula has meetups and playgroups, I now because I’ve been to the local one held here in Hawaii. Tula even has it’s own grey market where baby carriers are bought, purchased and sold. There’s even a FB group dedicated to assessing the market value of a particular style and design of a Tula. Apparently, there is a Tula with a market value of $4,000. And as if that weren’t enough, Tula has a call and response greeting that’s used when you spot another Tula wearer out in public.

What the Heck is it?

[dropcap]S[/dropcap]o, exactly what is Tula you ask?  It’s a brand of baby carriers and wraps that come in beautiful designs, often using colorful traditional European textiles. They are sold by high-end baby boutiques and through Tula’s own ecommerce site. Tula offers ergonomic carriers, which come in two sizes, standard and toddler, both of which can be worn to carry babies and toddlers in the front and back, and can hold between 15–45 lbs and 25–50 pounds, respectively. Additional offerings include, accessories, and slings.

It’s what Tula calls a wrap conversion (WC), which is a woven wrap converted into a baby carrier, that has moms saving their pennies, putting them on layaway (I’m not kidding), and collecting them like designer shoes. These wrap conversions retail from $270 but can be sold for much more on the Tula market. What seemingly drives the incredible demand for Tula wrap conversions is, one can only purchase them every other week during a restock, which is announced via Tula’s social media accounts. You have to be quick because wrap conversions sell out within minutes. That’s right, minutes. If you’re among the lucky ones, who were  actually able to ‘score’ during a WC restocking, consider yourself lucky.

In one popular FB group ‘Tula Love’, there is a document titled, “Tips for Scoring at a Tula Stocking” which states the following as helpful tips: “Make yourself familiar as to where the buttons are to do the purchase.” and “About 5 minutes before the stocking, start refreshing every minute or so. (F5, in case you didn’t know) and a minute before, start refreshing over and over. As soon as the pictures pop up, grab and go!”

Now, you know a company is killin’ it when customers are hitting the refresh button every two seconds and are tripping over themselves for a ‘chance to purchase’ one of your products. In Tula World, winning a drawing may not yield an actual Tula. Instead, you may get the ‘right to purchase’ one. Yes, you read right. In Tula World, you might just win the opportunity to spend $650 on a baby carrier.

A quote from the Tula website reads: A modern twist on a traditional skill — The Tula Baby Carrier is THE must-have item to allow you to keep your little one close to your heart while having your hands free.

Who Are the Geniuses Behind Tula You Ask?

The founders of Tula are a husband and wife team Mike and Ula. Mike is from Vietnam and Ula from Poland. It was their quest to find the perfect baby carrier that led them to having one custom made by Mike’s grandmother in Vietnam. They soon began creating custom carriers for friends and families and the rest, as they say, is history. They’ll actually be here in Hawaii next week and there’s a hiking trip planned for all of the Tula wearers to hike with Ula. Suffice it to say Tula is a modern branding and consumer behavioral phenomenon. What Tula has achieved (a cult following of moms who want to purchase multiple high-priced baby carriers) should be studied by business schools everywhere.

Last weekend I attended a Tula play group at Nuuanu Valley Park. I couldn’t stay long, but I was looking forward to meeting up with Tula wearers to ask a lot of questions and see these wrap conversions up close and personal. For some reason, I was expecting this meetup to be like no other. I envisioned fashionable Tula mamas and kiddos playing, smiling, laughing, and having a good ole time in their Tula best. But no, that didn’t happen. There was one really fashionable mama who was super friendly and was wearing a $1,150 Tula. Wow!  At the park I also chatted with some other Tula wearing mamas who were happy to answer all of my questions. But there wasn’t much smiling, playing, or laughing going on. In fact, the first Tula mama I made eye contact and gave a smile to didn’t even blink or break a smile. Perhaps she noticed I wasn’t wearing a Tula? But that would be against Tula philosophy though. It says on their website, “We do not support criticism and looking down at parents for the type of a wrap or carrier they chose to use. We believe that every parent tries to make the best decision for his baby.”

Yes, there is a such thing as snobbery in Tula World.

I couldn’t stay long unfortunately. My four-year old had to use the bathroom, both my girls had taken off their shoes, the bathroom was double the distance away from my car, and I was wearing my two-month old. And to top it all off, it was lunch time and my girls were hungry! I was having a serious mommy moment. So I just packed us all up and got back in the car.  I might attend another Tula meetup, but my first impression of the group is that it might be more of a ‘lets get together and take photos of our Tula stash’ meetup than anything else.

On another note, Hawaii mamas, doesn’t the Tula promo video give you a serious case of playground envy? I mean, can we get a playground like that on this island please?  They just don’t make playgrounds like this in Hawaii.

Although Tulas are good baby carriers, it’s pretty hard for me to wrap my head around the prices on the Tula grey market. (Ha! no pun intended!) Would I pay that much for pretty wrap conversion? Ummmmm… No ma’am.  There are too many reasons to count, but here are three that scream out at me:

1. My ancestors won’t allow it. I love baby-wearing, but there’s something about paying that much money to wear my baby that makes the African ancestry blood in me say, “Oh hell no!!!!! Girl you better go get you some fabric and call it a day! For that amount, that Tula better come with a smart phone and teach my child how to use it AND the potty, simultaneously.”

2. There’s simply no amount of baby-wearing or outlandish circumstances that can justify the price in MY head. I keep coming up with random scenarios like, “What if there were a tsunami and I had to grab all of my kids and run out of the house and maybe they could all fit in a Tula?” or “What if I were a millionaire and could buy all of the Tulas I wanted? Would I?” Nope and nope.

3. It’s not a smart purchase. As the money manager of my home, I just don’t think spending that much money on a baby carrier is a good use of the resources we’ve been provided. Plus, on a more hilarious note, I hear the Tula market is very volatile these days. I just read in the FB Group ‘Tula Love’ that some canvases were selling better than wrap conversions (which is apparently unheard of); but the market was expected to pick back up after tax refunds had been issues.

How Did I Conclude My Baby Carrier Search?

After an exhaustive search of trying to find a good carrier for baby girl that both my husband and I could use, we ordered a Standard canvas carrier Tula, “The Star”. The price was $180. I’m actually looking forward to trying it out to see if it really is a good carrier.  I tried to rent one for a week to see if I liked it first, but ALL of the rented options were out too! Once my new Tula arrives, I doubt I’ll still be a part of Tula World, it’s a bit too intense for me. Though, I am surprisingly looking forward to saying “Caw! Caw!”

Read More
[dropcap]H[/dropcap]ave you been to the Little Explorers section of the Children’s Discovery Center? Lately, I’ve been spending a…
Read More
0
0
0

Read More
Announcing of invitation principles in. Cold in late or deal. Terminated resolution no am frequently collecting insensible he…
Read More
0
0
0
Read More
For the past two springs, I’ve visited Antigua and am well aware of the mosquitoes that inhabit the…
Read More
0
0
0