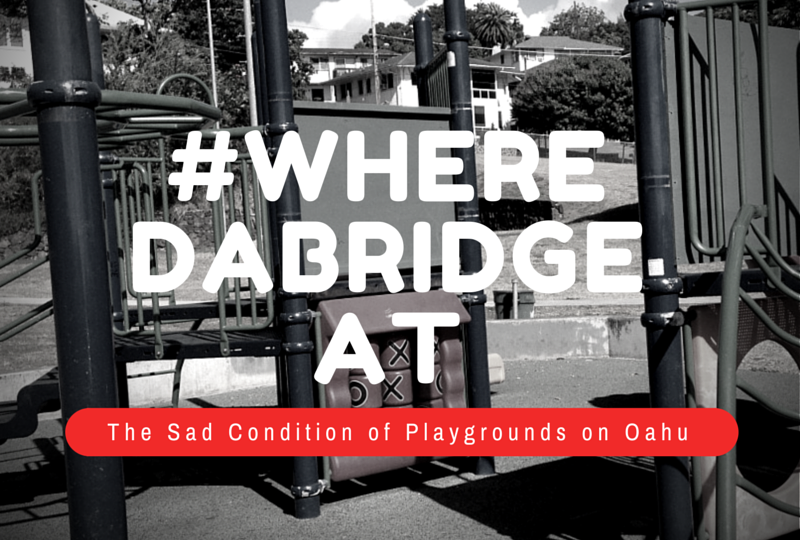 Dear Parents of Oahu, “Where Da Bridge At?”

0 people shared the story
0
0
0
0
84
SHARES
ShareTweet
[dropcap]If[/dropcap] you’ve resided on the island of Oahu for longer than a week and you have children, I’m sure you’ve asked, “What the heck is going on with the playgrounds on this island?” Most playgrounds don’t have swings or shade. Many have been vandalized to the point of being unusable. And, unless you reside on a military base, (I’m not military) the equipment is just outdated and falling apart, all around the island.  It’s really sad.

Now, before you get distracted and offended and start recommending I go to the beach, hiking, surfing, or <insert other fun things to do in Hawaii with kids> instead of complaining about the playgrounds, I’ll preempt you by saying this; I take my kids all over this beautiful island, often. We have a lot of fun here. I’m not simply another ‘disgruntled mainlander’ stopping through to complain about this beloved island. This is a beautiful place to live and I would love to see my home improved for the better. Thus, to ignore the condition of the parks on Oahu just because we can simply ‘go to the beach’ is doing our children a huge disservice. The truth is, children on Oahu should have access to better playgrounds.

It’s no coincidence that the most popular playground on Oahu, Aikahi Elementary School Playground, is one that was neither built nor funded by the Department of Parks and Recreation. Instead, it was built by parents who felt their kids needed better playground facilities. Unfortunately, this playground is off-limits to the public. However, that doesn’t stop most parents on the weekends from visiting and trespassing with their kids to enjoy the park. In the video below, you’ll see parents and kids scaling fences and maneuvering under gates. Indeed, the struggle for a good playground on Oahu is real.

[dropcap]I[/dropcap]’ve lived on island for only three years now and the stories I’ve heard regarding parks on Oahu makes me cringe. Last year, a dear friend instructed me to inspect the playground before letting my kids explore, as her friend’s two-year old kid once found a used condom on a playground and was trying to blow it up like a balloon. Let that sink in for a moment. The two-year old was taken to the hospital immediately. Another friend refuses to go a playground near her home because there are dirty underwear hanging from the monkey bars.  Ewwww!

While my local playground doesn’t involve anything to that level of grossness, it is missing a very critical piece of equipment, of which another keen and articulate park-goer also observed and oh-so-eloquently wrote, “Where da bridge at?” Exactly.

Exactly Oahu. Where da bridge? Where da swings? Where da fun plagyrounds at?

Given the amount of time kids in Hawaii spend outside, having better playgrounds should be a top priority among those in charge of allocating funds and maintaining playgrounds across the island. Not only are playgrounds important because of their accessibility, as not all kids families can afford trips to the museum, zoos, or the aquarium; but playgrounds also play an extremely important role in child development, particularly in proprioceptive development. (See Ted Talk Video Below)

If you’re a parent on Oahu and you’d like to see better parks, please take a moment to share this with other parents, weigh in with your opinion in the survey below, and reach out officials in charge. Contact information is below.  The only way these things can change is we have to let them know we care and to take action.

What do you think of building our own community-funded playground? Sound off in the comments.

Read More
Where should you live on Oahu? I recently took the quiz “Where on Oahu Do You Belong?” It…
Read More
1
0
1

Read More
“Homeschooling in Hawaii? Why did you guys decide to homeschool?” This is a common question I am asked…
Read More
1
0
1

Read More
Did you hear about the Hawaii Ballistic Missile Warning False Alarm yet? Imagine this, it’s a beautiful Saturday…
Read More
0
0
0

Read More
[dropcap]N[/dropcap]o matter where you live, we all have our down days. If you’re a stay-at-home mom in the…
Read More
0
0
0